A gate at an airport allows an airline to start flights to the airport. Each gate gives 10 slots. At the end of each month the price of each gate is taken out of the airline's account as rent.

You will need to rent gates at airports before trying to create a route to that airport. Otherwise, the desired airport will not show in the dropdown menu when trying to create a route.
Navigate to the Rent Gate area by going to Operations, and click Rent Gate in the top menu. You will now see a dropdown menu with which you can select a way to view the gates for rent.

Selecting Continent from the dropdown menu will show a clickable map where you can select a continent to see all gates for.
Some airports are assigned to a different continent than their geographical location. This is due to game balancing.

The View Gates page. Using the dropdown menu, you can select three kinds of view selections.

After selecting a country or continent you will be presented with a list of airports. They can be sorted by the following data:

If you wish to only rent one gate, click on "OCP" (stands for One Click Purchase) and, if there are enough gates at that airport, you will immediately get one gate at that airport.
If you want to rent more than one gate at a time, you can click on Rent. The next page will show you a map with the location of the airport. Below the map, you can see the airport's IATA and ICAO codes, the amount of passengers per year, the gate costs, and the number of gates left. If there are no gates available, you can naturally not rent any of them.
Choose the number of gates that you want to rent in the bottom of this page. Remember that one gate will give you ten slots, or ten possible flight frequencies. Click Rent to continue. Once you've confirmed your selection, you will pay the rent for the current month. You can return gates if you don't need them, but any rent paid will not be refunded.

Rents are always due on the first of the month. When first renting a gate, you will pay a whole month's rent, so it is preferable to start renting a gate near the beginning of a month.

View Your Own Gates

The airports with dark background are your focus cities.

The 'View Gates' page will give you an overview of all the gates you have currently rented, and also the amount of slots available at the airport. To go to the 'View Gates' page, navigate to Operations and click View Gates.
Sorting works as when renting a gate.

Also shown is the utilization percentage of the gates, which is the amount of available slots you actually have in use. The next column says Tagged - if you have rented gates from an airport that you don't actually use, they will be tagged automatically by the game after one game month. After the next month, any gates that are tagged will be returned automatically. The game will message you automatically to warn you.

If you have more than 10 slots available at an airport, the game will give you an option (via a checkbox) to return the gate. This will save you money at the end of the month, seeing as you don't have to pay for the unused gate anymore.

If there are airports where more than 10 slots are available, a checkbox will appear next to that airport. Click the checkboxes of the airport (or airports) you want to return gates at, and once you're done, click the Return button on the bottom of the list.

For each airport you selected, choose the number of gates you want to return. The dropdown menus will only allow you to choose the maximum amount of returnable gates, so don't worry that you will return too many. When you're done for all airports, click the Return button again to confirm your selections and return the gates.
Note: You will not be refunded any paid rent, even if you just rent a gate for a few minutes (whether intentionally or accidentally), so be wise in your decisions!

Note: The term "focus city" is interchangeable with "hub" or "bases".

The top part of the gates table shows you how many domestic and foreign focus cities you are using.

For example, if the world has a [2]7 Focus Cities listing, that means you are allowed any combination of the following:

Some worlds allow for infinite focus cities, that is shown by this symbol: ∞

It is also possible to create routes from bases of members of your alliance, provided that alliance base has enough alliance route slots available and that you have a gate at that airport.

Check the Create Base page for further information on how to create a new Focus city.

In order to make the game more balanced, there are some slight geographical discrepancies that one should be aware of.

If you have satisfied these requirements and you are ready to create a focus city, then go to either Rent Gates or View Gates, here you can see on the top right the options to open or close a focus city. Click on Open Base, then select the airport you have rented the 4 gates at and finally click Create Base. Remember that each international focus city also counts as two domestic bases; in a public world, you can usually only have 7 domestic focus city or 1 foreign and 5 domestic focus city.

Creating a focus city costs 60 times the price of a gate at that airport (e.g., in an airport where each gate's rent is €100,000, creating a focus city will incur a €6,000,000 one-time charge.), make sure you have enough money to create the focus city before you use money on the gates.

Once a focus city is established, you can return up to 3 gates immediately if you don't think you can fill up enough slots to keep all 4 gates. In addition, creating a focus city will now allow you to build a terminal.

Closing a focus city is only possible when there are no routes departing that focus city. The easiest way to accomplish that is under the View Routes page, selecting the focus city you want to close under the Show Routes From: drop-down menu, selecting all routes by click on each checkbox, then clicking on the Close Routes button.

Once that has been done, you can find the focus city you want to close by clicking on the Close Base button on the View Gates or Rent Gates page.

Use terminals to get more than 25 gates at your base or to get more gates if none are available to rent.

A terminal is your airline's own area of the airport where gates can be constructed exclusively for your airline. This can be useful in cases where there are no more gates left or if your airline has reached the cap of 25 rented gates. It is not possible to rent more gates when you have a terminal at an airport, all new gates must be built.
Terminal gates only cost 75% to maintain (their rent is therefore 25% less than regular rental fees), so if one builds a terminal early enough in the game, the construction costs may be recovered through the money saved in reduced gate rental fees.

Once you have built a terminal, all flights from that airport will move into the terminal. If there are more flights than new terminal can handle, the rest of the flights will remain in your rented gates.

Select an airport where to build a terminal

For example, if you have 5 rented gates and 50 flights (using 50 slots) out of your focus city, and you build a terminal with 5 gates, then all 50 flights will move into your terminal, leaving you with the 5 rented gates available. You can create more routes to utilize those rented gates or return a portion (or all) of them. If you want to keep all 5 rented gates, you will need to utilize at least 41 slots before the following game month to prevent them from being automatically returned.

In order to build a terminal, you must have a base established at the airport. A new terminal must be built with at least five gates, and the cost of building a gate is significantly more than normal renting of gates. For every ten gates you build at once, one rented gate will be returned automatically.
Terminals can be purchased by clicking on the Build Terminal link under the Operations menu or via the link from the View Gates page. The focus cities where you haven't built a terminal are listed together with the minimum build cost - i.e. the cost of a new, five-gate terminal. Use the drop down menu to select a focus city where to build your terminal.
Once you have selected a focus city to build a terminal at, you will be directed to the Build a Terminal page.

You can adjust the number of terminal gates you want to build by using the Gates to Build text field; however, remember that a minimum of 5 must be built in a new terminal. If you adjust the number of gates to be built, you can click on Submit to see how much it will cost. Once satisfied with your selections, click on Build Terminal.

Select an airport where to extend a terminal

Select the number of gates to build

If you wish to add additional terminal gates, terminals can be extended by clicking on the Build Terminal link under the Operations menu or via the link from the View Gates page. By selecting an airport from the Extend a Terminal drop-down menu, you will be redirected to the build page for that airport.
You can adjust the number of terminal gates you want to build by using the Gates to Build text field. If you adjust the number of gates to be built, you can click on Submit to see how much it will cost. Once satisfied with your selections, click on Build Terminal.

Just like when building a new terminal, for every ten gates you build at once, one rented gate will be returned automatically. 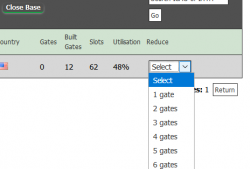 Select the number of gates to demolish

Reducing terminals removes one or more gates at your terminal. It can be that you don't need them any more or that you are closing the base at that airport.
If you wish to reduce a terminal, go to View Gates and click on the Reduce Terminal button. You will be presented with all your airports with terminals and drop down menus allowing you to select the amount of terminal gates to be returned. When you have selected the amount of gates you want to return, click on Return