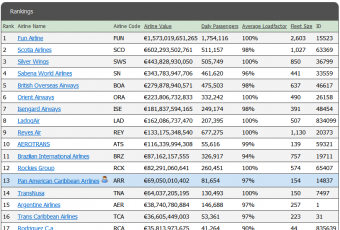 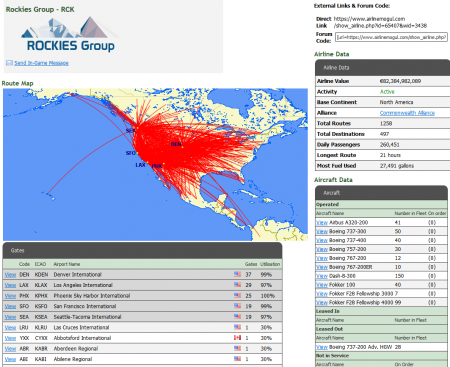 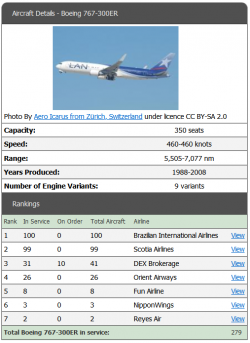 Detailed ranking of one aircraft model

Are you interested in how your airline is faring compared to the others? If so, click on the "Reports" button at the top. There are four types of rankings in AM: Global Airline Rankings, Continent Rankings, Aircraft Rankings, and Alliance Rankings.

This is the default page of rankings. Here you can see the ranking of all airlines listed according to their value. The list can also be ordered by daily passengers, average loadfactor, and fleet size.
The airline value is the the net worth of the airline, which is calculated based on cash and the book values of the aircraft the airline owns.

If a player has not logged in for three weeks, their airline is flagged as inactive. This will remove them from the rankings, but their airline will continue to operate as usual.

This is the fourth selection in the rankings page. You can check the ranking of your alliance here. They are listed by total net worth in descending order.

Aircraft Rankings is the third selection on the rankings page. Here you can see the types of aircraft ranked by the total number currently in-service throughout the game. This ranking is useful as higher aircraft popularity may be an indication of profitability, assuming you trust other owners to maximize profits. Scrapped aircraft are removed from the list.

After clicking on an aircraft name, you will be presented by a page with more details and an image of the aircraft. It is possible to see some basic information about the aircraft, which airlines operate it in their fleet, and how many are on order.