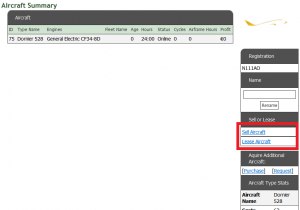 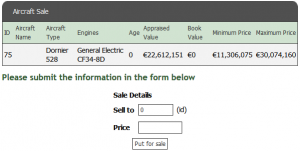 To sell more than one aircraft at once, you can use the mass-sell aircraft feature.
Find it by going to 'Aircraft' -> 'Mass-Sell Aircraft' in the top menu.
Of the aircraft presented on the list, select the ones you want to sell by checking the check-boxes on the right of the list. At the bottom of the list there are two input fields. The first field is for the user ID if you want to make a private sale. If you want to make the sale publicly available, just enter 0 or leave the field blank.
The next field is the price setting. Set the price as percentage of aircraft value, then click on 'Proceed'. The list is now updated with only the selected aircraft, and the price they would have when put on the market. The aircraft are not put for sale yet.
You can now repeat the process until you have reached a satisfying price. This time, instead of clicking on 'Proceed', you click on 'Sell Aircraft'. A confirmation message will show telling you the aircraft have been put on the aircraft market. 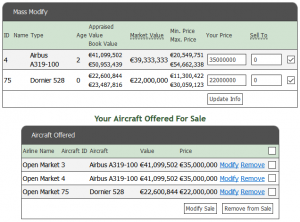