Alliances are a way for a group of airlines to interact with each other on a more detailed level. They are entirely created by users and may have slightly different rules and benefits.

The biggest benefit of alliances is the ability to create routes from an alliance member's base. This allows for an airline to expand their route network to places their own focus cities cannot reach. For example, if you have a base at London Heathrow, and you want to fly to Sydney, an alliance member might have a base at Bangkok, you can first create a route from London to Bangkok, then create another route from Bangkok to Sydney.

Many alliances are well-organized and disciplined. They can have standard rules, including protocol on establishing alliance routes (e.g. permission from the alliance base's owner).

There are, however, drawbacks to this system, as there are no per-airline restrictions when allocating alliance routes. If someone chooses to use all allocated alliance routes from a member's base, that airline can do that with no repercussions (maybe except perhaps being rejected from that alliance next round if the airline tries to join again). In open alliances, in particular, it can be common for someone to immediately use up all allocated alliance routes (to further their own airline's value) as soon as a new member joins.

As of right now, you cannot kick out an alliance member once they have joined. So prudent judgment must be used when voting to accept an unfamiliar airline into your alliance. 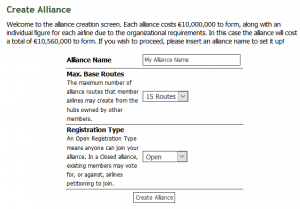 As the founder of an alliance, you would enjoy the small privilege of having executive decision power on vote (if you have chosen a "Restricted" alliance). This means you can pass or fail a vote yourself, when less than 50% of all your members have voted.

Each alliance costs €10,000,000 to form, along with an individual figure for each airline according to their size. In many cases, the cost of starting an alliance may be higher.

For alliances with open membership, you simply pay the fee, and you become a member. For those that have restricted memberships, you would need to go through a vote by the existing members in the alliance. Some alliances with restricted memberships do have other application procedures like applying in the forum and go through a trial period before you can apply in-game. More than half of the votes need to be in favour of your airline joining - or the founder of the alliance has to approve your airline with an executive decision.

The application fee to join an alliance is €1,000,000 in initial expenses along with an individual figure for each airlines according to their size. However, in many cases, and as displayed on the confirmation page, the fee may be higher. If your application is rejected by the alliance, only a portion of the application fee will be returned.

There is a special section in the game forum where you can view currently existing alliances, and try to find one that suits your needs. You can also start a thread to recruit alliance members, if you want.

An asterisk (*) indicates you do not have a gate at that particular alliance base.

If all allocated alliance routes have been used up at a particular focus city, that focus city will not appear in the drop-down list.

Once you have selected an alliance base, proceed creating a route normally. Note: if you do a route like London-Bangkok-Sydney, you do not have to use the same aircraft. You can use a different aircraft for the Bangkok-Sydney route. 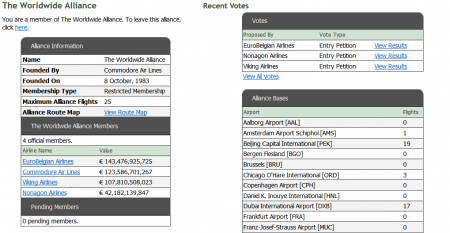 To view your alliance, hover over the "Corporate" header, then select "View Alliance" under it. There will also be a link to the alliance voting page where you can vote for entry petitions.

Here it is possible to see details about the alliance, including the amount of alliance flights from all alliance members' focus cities. The number under the "Flights" column indicates how many alliance flights are flown from that particular focus city. When this number reached the maximum number of alliance flights allowed, that focus city will disappear from the list of departure airports on your Create Route page.

You can check the ranking of your alliance by going to the "Reports" page and clicking on "Alliance Ranking". The alliances would be listed by total net worth in descending order.

You can also view details of other alliances (except a listing of their alliance bases) by clicking on the alliance name.