The view aircraft page (accessed by gong to 'Aircraft' --> 'View Aircraft on the top menu) shows all the aircraft you own, have on order, and have leased in, along with data like the aircraft's daily profit, value, status, age and the number of hours it has left. 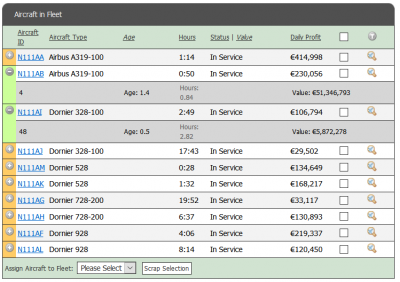 The list of aircraft can be used to get an overview of your aircraft. Expand each line by pressing

or all lines at once with

. The list is sortable by all values described below:

Use the check box to select more than one aircraft at a time to scrap or to assign a fleet.

to open up a detailed page for each aircraft 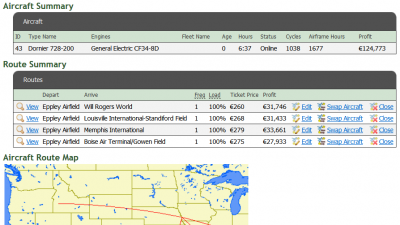 When looking at each aircraft individually, you can see which routes are flown. Each route has the option to edit, close, or swap aircraft (Hotswap). Some of the information shown on the View Aircraft list is also available here.

On the sidebar you have options rename the aircraft, to close all routes, sell or lease the aircraft (when all routes are closed), and purchase or request more of the same aircraft.
The sale log shows who has bought the aircraft when and the Aircraft Type Stats contain information such as speed, range, seats, and fuel consumption.