You can request airplanes via the brokerage system. These requests show up in the Aircraft Market, in a special section called Open Broker Requests. Every airline can view and accept the placed requests, after which the plane(s) is (are) automatically ordered and forwarded to the buyer.

What is brokerage and how does it benefit my airline?

When ordering aircraft directly from the manufacturer, you pay the whole cost upfront even if your aircraft might get delivered many months later. When requesting aircraft from a broker you only pay 35% of the order value right away while the remaining 65% are paid when the aircraft are delivered. This means you can request almost three times as many aircraft from a broker than from a manufacturer, as long as you have money to pay for the aircraft when they are delivered. This system can be especially useful when ordering large aircraft, although those orders might be less likely to be picked up by a broker.

Accepting brokerage requests can be beneficial too, since any markup on the order is a profit for you. If you see any requests on the open market, then you are free to fulfill the order.

You can place new requests at two different locations:

There will be a dropdown menu, similar to that on the Buy Aircraft page, with the header Request Aircraft. Select the manufacturer you want to request, and click Select.

In addition, when viewing a specific aircraft on your View Aircraft page, there is a link on the right-hand side called Request under the Acquire Additional Aircraft header. This will take you directly to the engine selection page.

You will now go through the same steps as when ordering a new airplane: you need to select the aircraft type and engines. This time, you will need to select the radio button next to the engine variant you wish to request, then click on Request Plane. After that, the most important screen will come up.

In this field, you need to input the number of planes of the chosen type you want to request.

Once you are satisfied with your selections, click on the Submit button.

When you place a request with a 0% markup, the chances of your request being taken are quite small. Regular players will not profit at all from this, because they buy and sell the airplane at the exact same price. Official brokers will only profit slightly, but that might not be enough of an incentive for them to take your request. If you, as a normal airline, decide to take a request with a 0% markup, you will not make any profit. If you decide to take a request with a markup below 0%, you'll end up losing money because you order the plane for more money than you sell it for. 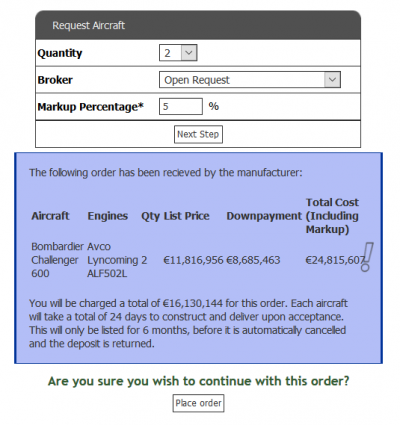 You will now see the total cost of your order (as indicated by the image above). First shown is the list price, or the normal market price for the aircraft type. Next is your downpayment. The downpayment is a payment of 35% of your entire order value to the airline taking your order. This is to protect the accepting airline against bad buyers, who don't buy the plane once they've ordered it. The total cost including markup shows you what you're going to have paid in the end, once all planes have been delivered. Below, you'll find another number. This value is the amount of money you will pay to take delivery of the aircraft(s).

Please note the downpayment is withdrawn from your account the moment you place the request. If you cancel your request the downpayment will be returned immediately as long as it has not been picked up by a broker.

If you are satisfied with the request, click on Proceed at the bottom of the page. If you wish to make changes, you can do so at the top and click on Submit. The page will refresh with the changes you made (along with the new costs of your request).

Once your request has been taken by another airline, the aircraft will have been ordered automatically. When the aircraft have been delivered to the selling airline, they will be offered for sale to the you automatically via in-game message. The plane will be available for three game months, or three real-time days, without the selling party being able to withdraw the plane. After those three game months, the plane will still be listed, but the selling party can withdraw the plane from the aircraft market.

If no airline accepts your brokerage order within six game months, the request will be automatically withdrawn, and the downpayment will be refunded automatically. You can withdraw your own requests at any time, as long as they have not been accepted by another airline.